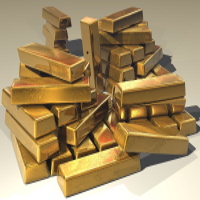 In this document, we look at the GOLD Forecast Model that I have personally invented to have high chances to know in advance when we may see a high and a low, and what the most favorite trend is for the future.

In the last 10 years, I have never been able to develop a complete Forecast Model for Gold, and I never hid it. Actually, it has never been my favorite Market; I used to trade it with short-term analysis mainly, and I have always found it difficult to create a reliable forecast for it.

In the last days, after trying and trying for many years to find a solution, I have had an intuition. When I have an intuition, I do not know if it works, I can only try it; only after testing it, I can say if there is something that works or not. Then, sometimes we are so longing to see something that our illusion makes us feel that it actually seems to be something great… but the truth is that, in the reality, it is not.

Well, I know a bit about my “illusion” and I think I do not make this mistake anymore (not often, at least); and when I saw the results of my last intuition, I got pretty excited. To confirm that I am not falling into the illusion of seeing something that I want to see, I share with you the results, so you can tell me if I am mad, or if we really have something that can be a change-ruler of our way to trade Gold.

I cannot go back over 2012 with the test because I do not have data enough to make my studies (I have been able to gather a bit more data, but I still have to use it to test it, that’s why here you see only the test from 2015).

Let’s start! Be aware that the charts of Gold may not show the right price because it is a modified version to remove the gaps created by the difference between the expirations of the Future contracts (so we do not see the gaps that we usually see when we look at the Spot-Chart data). In this way, the movement we see is much more reliable.

The Chart in black is the Gold price movement, of course; in blue, you see the GOLD Forecast Model, which I can create years in advance.

The 2015 Gold PFS is great. It forecasts a downtrend from April to the beginning of August. Then sideways and down to the first days of December. Even the buy-opportunity shown by the PFS, at the beginning of August, is correct. The PFS has been able to forecast the most important swings of the year, even if it has not been great during the first three months of the year.

Sure, we understand from this chart that we cannot rely on each top or bottom created by the Model. We look at the main trend shown and at the most significant changes in the trend. If, for example, the Forecast Model shows a Low at the beginning of August and December, and the Gold price actually dropped until these dates, then the buying opportunity becomes more reliable.

I can conclude that the general forecast for 2015 was good.

Even in this case, the PFS seems to be off until March 10. In January and February, the Forecast Model shows a drop, while Gold pushes up. However, after March 10, the Model has been good to forecast the main forces. Great is the buy-opportunity at the end of May, and the top suggested at the end of July and around September 25, followed by a drop until mid-December, which was perfect.

This is again a very nice forecast. Well, from July to December, it has been just perfect (it really seems to be working very well from April to December, I have to notice it!).

In January, the Forecast foresees the up push until February. Then, it suggests a top on February 1, starting a new downtrend, but the Gold price will continue to move a bit higher. Anyway, even in this case, the Model is not good between February to the beginning of April, but then it works fine again.

The PFS shows a buy-opportunity around June 10, but the perfect timing would have been at the beginning of July (where the Model shows a secondary Low where to buy). Then, as I said, all perfect! The Forecast goes up until the beginning of September and then down to December; Gold price will do the same.

The 2018 Gold Forecast Model seems to be quite choppy, maybe confusing. But look at the swings suggested; if it is wrong, the Gold price simply moves sideways; when it is right, it allows us to make good trades.

Simply think to buy at the beginning of January and sell around the 17th. Buy on February 18 and sell on March 26; Buy on May 17 and sell on June 22; buy at the end of July and sell on September 9; buy again on October 10 until December. This is what the Forecast Model suggests!

Do it, and you will see that we end up with profits during a year where Gold closed a bit down.

Not precise in November, but it does suggest to buy at the end of September when Gold shows a Low.

However, we can say that the Forecast Model has been able to forecast the main trend of the year, definitely!

And this is the 2020 Gold Forecast Model… If I only could get it in August!

I do not think there is any need to explain it! It has been very good for most of the year. It suggests a top at the beginning of August, followed by a general downtrend until December. Well, it seems to be very correct, so far!

Sure, we do not have to call the miracle! This is a normal Forecast Model, which is sometimes right, and sometimes wrong. However, I have never, ever been able to create any reliable forecast model for Gold, not even close to it, until now. I consider the Gold Forecast Model a blessing because now I can see when and where I may expect the trend, and this can be very helpful! Most of the times, we have doubts about the main trend to follow, but once we know exactly which trend has the highest odds to be correct, then also the strategy becomes much easier; we may fail a few trades, but once we get the right signal, then we can ride the trend and making good profits. How do you think I have been able to forecast correctly many trends for the S&P500, Cotton, Beans, or Corn? Mostly, thanks to the reading of my Forecast Models. So, you understand how this discovery may be important for me!

The last 6 years have shown that we can use the Gold Forecast Model as one more tool to forecast the main trend; it is also useful to suggest what we should NOT expect, to not fight against a trend. What you see here is what I got from my research. You can judge it by yourself. Keep in mind that my Models are NOT adaptations of sinusoidal sums or any other kind of cycle-system that tries to find a similar path. There is no adaptation in my system; it follows specific rules that, when applied, I cannot change to “fit” with the market. Hence, if it works so well for six years, I deeply believe that it will keep working for the next years too.

What about the 2021 Gold Forecast?

The Subscribers of any of my Services have already received the 2021 Gold Forecast Model. It shows a big surprise… who knows if it will be right, we will see!

If interested, you can get the 2021 Gold Forecast Model ordering the Daily Repost Service, the Weekly Report Service, or any 2021 Annual Bulletin.

That’s it! Have a great Christmas time!

We use cookies to ensure that we give you the best experience on our website. If you continue to use this site we will assume that you are happy with it.OkPrivacy policy