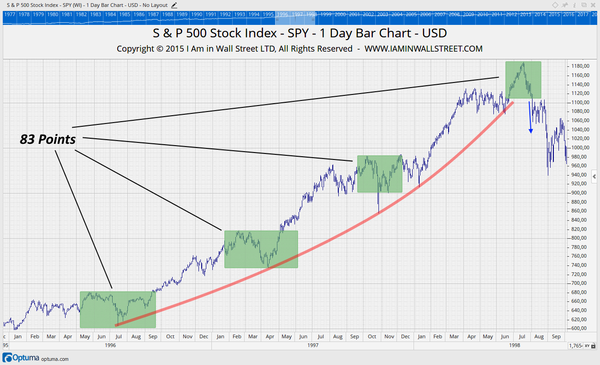 The S&P500 Index saw a higher volatility in the last days, something that is scaring the Bulls. Is the uptrend pattern still alive?

The parabolic pattern of the S&P500 is in front of everyone, and usually, once the uptrend is over, we see a break of this pattern, with higher volatility. To prove what I am saying, we can look at the past, because a guy said: “the Market repeats itself“. The problem is to understand how this sentence is correct.

LOOKING AT THE PAST

I can resume here the most important bullish trends that followed a parabolic pattern since the 80’s, and we discover also that pullbacks are often of the same magnitude:

Here we see the parabolic pattern, ending up with a crash, the famous 1987 crash.

There is something wonderful in this pattern: the biggest pullbacks in the period 1982-1987, before the crash, were all inside a range of 28 points. The rectangles you see in the chart have a height of 28 points, and we can appreciate three pullbacks, all around 28 points! I am not saying that one has 10 points drop, and the next one 28, I am saying that all the three pullbacks were almost perfecty of 28 points. The 1987 crash began after the S&P500 tried to remain inside this pattern. The breakout over this pattern was the beginning of the real crash.

I am not jumping to conclusions yet, I am just describing what I see as facts.

Another parabolic pattern, ending up with a sideways pattern and higher volatility.

Here we see again three pullbacks, everyone around 24 points; in the last phase, the uptrend accelerates, and in October 1989 we see a pullback larger than 24 points; this is also the end of the strong uptrend, and a new sideways pattern began ending in a Low in 1990, but no crashes.

Not really evident, but we see the uptrend accelerates over the time.

The pattern of the pullbacks are not that precise as before, but we can see similar pullbacks around 83 points. In October 1997 we see a fast movement over the 83 points rectangle, recovered right the day after. A stronger down movement began only in 1998, when the S&P500 moved over the green rectangle with the pullback; you can see the acceleration over it, and the beginning of a severe drop. That was just a fast little crash, because after 3 months the S&P500 had already recovered all the losses.

Very long uptrend, ending in the summer 2007 and the big crisis began.

WHAT HAVE WE SEEN?

We can definitely state that:

CAN WE USE THE SAME STUDY FOR THE ACTUAL MARKET?

Obviously, that’s the purpose of our studies! If we consider the last year, where the parabolic pattern is evident, we see two similar pullbacks:

This is a short time compared to the studies we made before! But the pattern is clear, and we saw the strongest down acceleration once the S&P500 moved under 2800 points, the area where we could see the support in case the Market maintained the “75 points pullback pattern“:

If we decide to study the uptrend since 2009, we discover two important pullbacks: in 2011 and in 2015-2016. These two drops looked like the end of the world, I remember that, but I remember when, in 2016, I said any pullback was a great buy opportunity (here the document I sent to our Subscribers on February 11, 2016, the day of the Low). These two pullbacks have a similar magnitude:

Almost the same, considering these are the two largest drops of a period long 9 years.

In trading, statements are very dangerous when we try to forecast the future. It is always better we speak in terms of statistics. If you agree with me, we can state that:
In my opinion, the down push began the movement too strong for a new real downtrend. If we do see a crash, I believe it is again a new buy opportunity, we just need to wait for the best supports, without trying to anticipate the Market. If a bear Market is about to begin, it will not begin with a crash after three days the S&P500 did the highest High.
These are just suppositions after I looked at the past…
But you know, in trading, everything can always happen…