HomeBlog – Daniele PrandelliForecastWhat I Did Forecast

What I Did Forecast

In the last Newsletters, I said that I did not trust in this crash. At certain point, I admit I started thinking that I was wrong, above all on Monday, March 23. Let’s see why…. Not only the Stock Market… Commodities Opportunity… Futures Strategy Performance…

I do not trust this crash, and I do believe this is a great buy opportunity instead of the beginning of a new Bear Market, until my timing study says so, and it says that this is not the time for a Bear Market.
Can I be wrong? Of course I can, but right now, I do not see a thing to tell me that I am wrong.
Well, there has been one thing that scared me, I admit that. I provided a clear forecast to my Subscribers, and this is simply what I said: “I forecast a Low on March 10 or between March 12 and March 18 – We should not see any new Low after March 18”. On March 23, we have seen a gap down and a new Low. That was not planned at all, because the energy at the March 18 Key Date was very strong, in my opinion. Hence, I said to my Subscribers: “with this gap down there are only two options: or we see immediately a strong down acceleration and a new down swing, or we must see immediately a recover of this gap, within one day, for the beginning of a new uptrend as I expect”.

The S&P500 opened in gap up immediately, the day after, and the S&P500 started a great up push.

This is the intraday S&P500 chart, where you can see how the Index jumped over the March 18’s Low, but the day after it made a new jump above it. That level, at that energy, was a big decider to be able to read the S&P500.

Do not take me wrong, it has not been easy, and it is not over yet, of course. Between March 12 and March 18, we have seen a 500 points movement! This is such a special moment, and I have had some losses trying to open the LONG position. But now, we are making profits. The strategy will have recovered all the losses if the S&P500 is able to reach 2750 points (while the S&P500 will be still 650 points down).

Here is the actual S&P500 Futures Strategy Performance, provided in my Daily Report Service (from 2018 until now):

The gap down of March 23 was a shock for me, and I thought: ok, I have to accept that my forecast is wrong, this time! Or we see a recover in one day, or it is over! I got lucky (this is not luck btw), because we have seen immediately a recover.

I do not know if I will be right or not, there is still time to see the S&P500 at lower levels. Only the time will tell if I have been the only foolish one to forecast immediately a Low in mid-March, or if I will be the only one right. Why do I say so? Because I have heard many analysts saying that we are in a new Bear Market, or that we would have seen lower levels until May, at least. What I know comes only from my studies, and I stick with them when I have to provide my point of view.

I repeat: I may be wrong and there must be always a strategy behind the forecast that we want to follow.

Not Only the Stock Market

The is so much interest by the media about the Stock Market fall, that we are not seeing how many other markets can provide good opportunities. Grains presented a great opportunity. Despite I was trying to open LONG positions during the last weeks, using light positions, I said to be very aggressive on March 17-18 to open new LONG positions, because I had a strong timing. I said to do it for Corn, Soybeans and Wheat. The results of this call are in the chart:

We did a great job with other Markets as Gold (probably the best trade strategy between all the Markets that I follow) and T-Bonds.

With Gold, I have found the right pattern to follow, and for this reason I have been able to ride several nice swings. The last one was the best one, because I said to buy at 1460 of the April Contract, and we sold the last part of it at 1671. It happened in just one week! 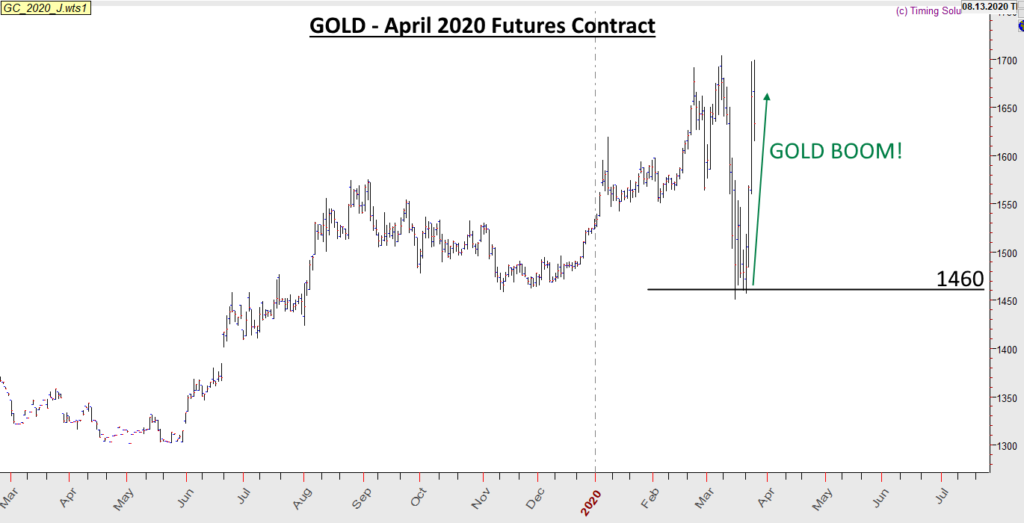 We did great with T-Bonds too. Nope, I did not follow the strong uptrend, but I knew a very strong resistance, and I used it to open SHORT positions with the June 30-Year Treasury Bonds Future Contract, right from area 183. 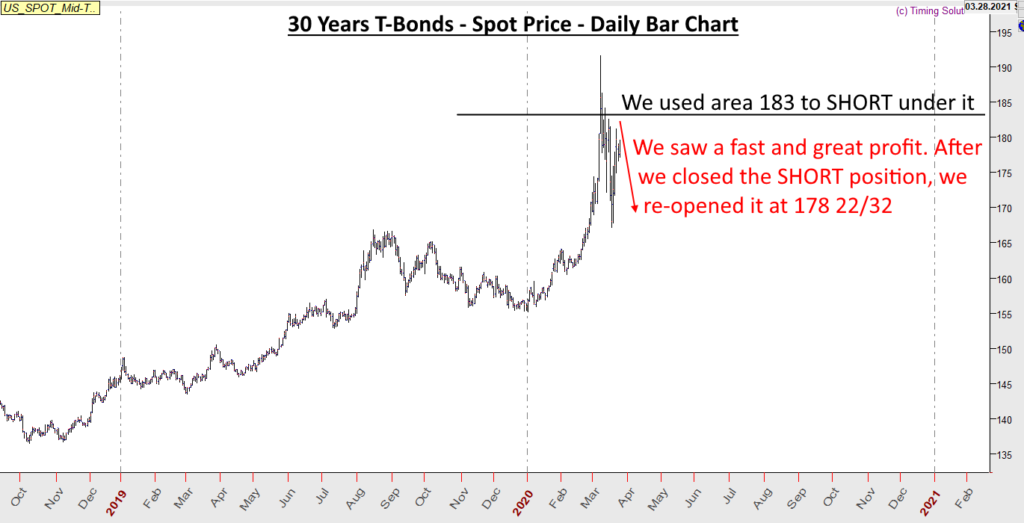 What about Crude Oil? I’d like to tell you that we did great with Crude Oil too, but that would be a lie. We tried to buy in several occasions, where I had potential supports and potential good timings, but the fall was so strong that I had to take several losses. In my defence, I can say that since July 2018, my Futures Strategy is in profit of 18.54 USD per contract, while Crude Oil is 44 USD down per contract. However, since Novemeber 2019, my strategy has lost 8 USD per contract, which is not good, and I cannot make an excuse only because Crude Oil crashed. With my work, I am supposed to provide profits despite the performance of the Market.

Here, I want to show you the performance of my Futures Trading Strategy (provided in my Daily Repost Service) since the first of January 2018 (the perfomrance is in terms of points per trade): 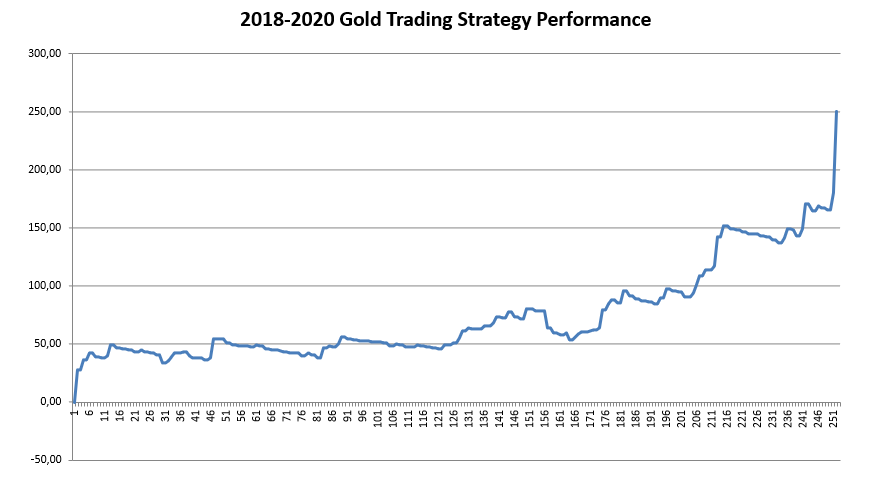 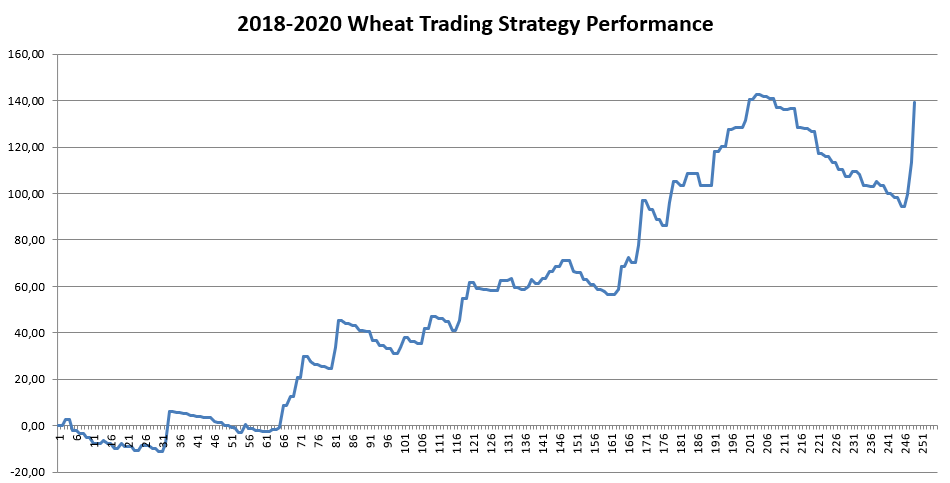 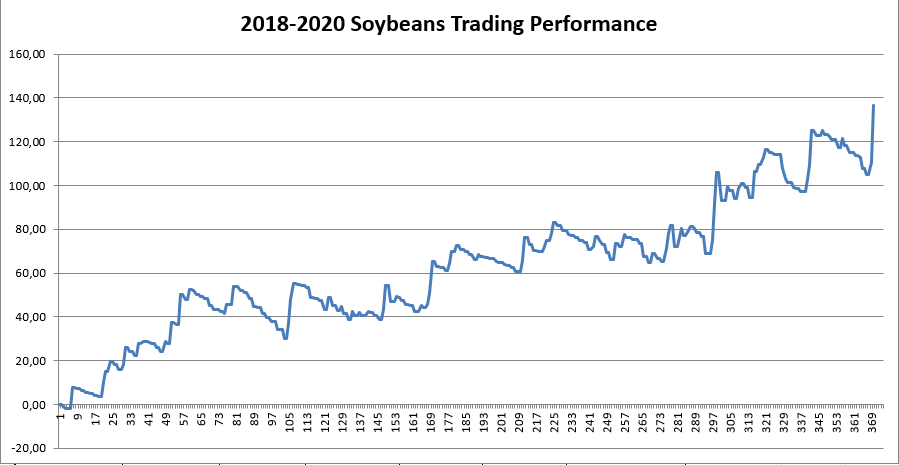 You see, there are losses too! But we have to look at the trend of the profits! If the trend is up, we are making good profits. I had to suffer a lot with Crude OIl, but we will be back to make profits with it too, I am sure about that.

Good trading to everyone!