HomeBlog – Daniele PrandelliForecastMarch 2020 Panic: How did you react to it? 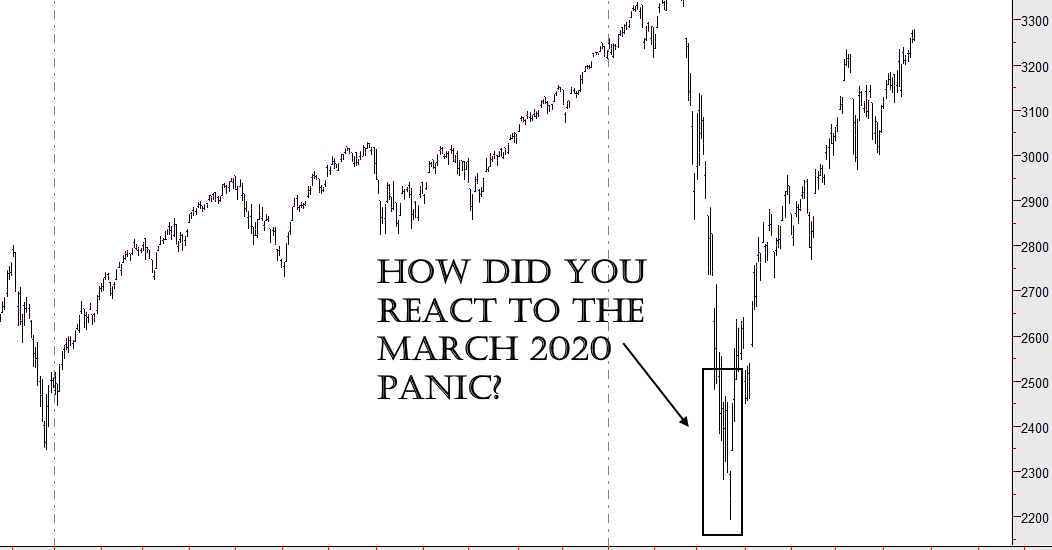 Did you sell everything in March 2020 Panic? … You should learn from your actions to not repeat the same mistake… Many people are calling this uptrend as a “Bear Market Rally”, really?!? … The crowd sentiment helps you to read the real situation… Do not look at the Main Street to invest in Wall Street…

It is not easy to accept that sometimes we make mistakes (and it is easy when we see something like March 2020 Panic). However, if we are humble enough to judge our actions, above all when those were wrong actions, we can learn something about ourselves and maybe we can avoid repeating the same wrong actions next time (or repeat the right action if we did it correctly).

Yes, every situation is different, that’s what people used to say, but numbers teach us a lot about the past, and we usually miss them when the panic is everywhere. Did you close your LONG positions in the Stock Market right in March 2020 Panic? That was a mistake, of course. We simply had to look at history to not do that mistake.

If we look at the last 40 years, we see that every crash or strong down acceleration became a buying opportunity; I can mention some of them right here:

Why this time had to be different? There is always an excuse to justify a mistake; this time probably we thought that we were facing a new event. So, when the S&P500 was at -35% from the Highs, the crowd was still expecting lower levels. But the numbers were right again, and this crash became the best buy opportunity we could imagine.

I have my own point of view, and I want to share it with you, hoping that it can help you next time.

Do not hope, use the numbers, they do not lie

The first mistake I see is that people create their points of view based on news or feelings, without looking at numbers; if you looked at numbers, you would have understood that a down acceleration meant probably the end of the panic because this is what happens most of the times; so, if you got stuck in the descent, probably selling everything was not a good idea; I am not telling it, history tells it to us. I am aware it was painful, but selling everything turned even more painful.

And now, I hear that this is a fake rally, or a bear market rally. Again, what is it telling it? Your feelings? The media? Some gurus? For what I see, the NASDAQ 100 is at new all the time Highs, the S&P500 has almost recovered the entire -35% crash. People who call it a bear market rally are those who sold in March, and now they still hope to be right. The numbers are already telling you that they were wrong.

I am not saying that the market cannot go straight down from now. But I hope you agree with me that this “rally” is not inside a bear market, not at all! The numbers speak for themselves.

You probably know already that I did call a Low in March 2020 in the Stock Market; I did not know I had to expect such a violent down movement anyway. Regardless of my timing techniques, I want you to meditate on the very bad sentiment out there in March (and this also explains why, usually, a fast crash is a ring for the end of the down pressure). To do that, I do not want to use words that are easy to say now, after we have seen a strong rally from the March 2020 Panic.

Hence, I paste here the same words I used in a comment on linkedin, written at the beginning of April 2020:

All the people are expecting depression right now, that’s why we will not see a bear market at the moment. We do not have to count on the perception of the crowd. The market has discounted what we are perceiving now (-35% S&P500!), it is always the same story. No one seems to understand it.

I keep saying since mid-March that this crash is a buying opportunity. And while everyone is waiting for new Lows, the S&P500 is 500 points up from the Low, at +20%! Rating companies are very famous to be late most of the time. They call a recession when the market has already lost 35%, and then they say that it is over when the market has already recovered the losses. I really do not understand the point of listening to those rating companies, since no one can be 100% sure of what it is going to happen. Always the same, nothing new under the sun…

I mean, I know I can be wrong, really, I can be the only one wrong here. But read all the comments here! Everyone is waiting for a disaster, everyone here! So, why we are not seeing a continuation of the crash then? Everyone is selling right now, looking at the comments. If we are all expecting the S&P500 at 1800 points, why it is not there yet? Do you understand the point? The market has never followed the logic of the crowd, and here it seems that the crowd is very negative. My scenario: as always happens, you closed your Equity positions in loss, after you recognized the crash. Now you wait for a better entry timing which will never arrive, missing the real bounce. As I said, I may be wrong.

You can read all the negative comments directly to the Linkedin Post, it is funny to read them now because people use to forget the mistakes they did. Be humble, recognize the mistakes to avoid them in the future, do not follow the crowd! Be the judge of your actions.

In another Post on Linkedin, you can read my comment where I worte the same around the end of March:

I know I am against the crowd, but I do not see any October 2008 here, as I keep saying since mid-March. As always, the market has already discounted what people are just perceiving now. However, I agree there is uncertainty, but the point is that once a vaccine is ready, everything will be back to normal, which may be around November. And I do believe that there will not be any new Bear trend until November. Yes, it is a paradox! That’s how the market often plays.

Let’s also say that we have seen a crash, not a Bear trend. We have seen a 4 weeks crash. We cannot call it a trend. We are all making suppositions here, time will tell the truth, I may be wrong, it would not be the first time LOL, but I am right so far. We may see a pullback, but I do not think we will see new lower Lows. If we want to look at the stats, look at what happened after a fast -30/-40% drop in history: it was time to buy most of the time. I would not be surprised to see a strong and fast recovery right now.
Do not forget that many people are perceiving a disaster in the economy, so if this is the real expectation, the market should be already at new Lows.
Just my point of view, probably from a different analysis approach 🙂

You can read this post and all the comments directly from the source. Again, look at the crowd, they were all wrong, in a panic!

It was funny to be the only one, between all those comments, who was very bullish! Sure, people were laughing at me probably, but I do not have a short memory 🙂

My point here is to show to not listen to the crowd when you have to decide how to invest! Actually, in certain extreme situations, I do believe that it is better we bet against the crowd! You have to trust to what you see with your eyes, you must judge the market, do not let the sentiment to decide for you. Learn it!

The Main Street is not Wall Street

Of course! We have again and again the proof of that! If the main street is suffering depression, it does not mean you have to expect the market to go down! They work with totally different timings, there is no point to believe that there is a correlation. Otherwise, we would all be rich, isn’t it?

I hope I have been able to push you to judge the market with your eyes, without believing in the crowd, in the media, or some gurus just because you think they are an authority in this field. Be independent and use your brain! When you make a decision, try to understand if you are taking it because of your feelings, or because you do see a plan based on numbers and statistics. The March 2020 Panic was a perfect example, again.